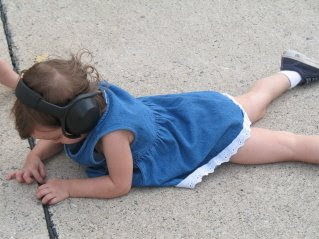 Alysa got a little bored at times and entertained herself by trying to pull the tar out of the cracks. We bought them earmuffs that you wear while shooting guns. It was pretty loud there 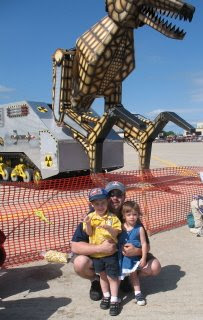 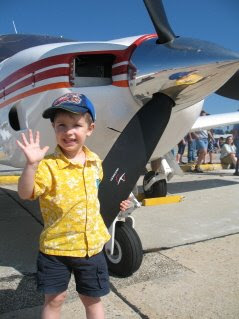 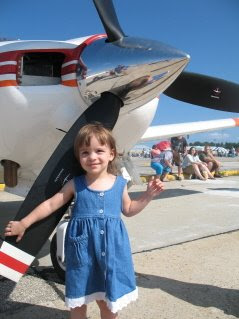 Brian was very happy that we were actually able to make it onto the base for the airshow this year. They were supposed to close the gates at 1pm. By the time we got out of church and took Katelyn to her grandparents we were not going to make it. But, when we got there a little after 1 they were still letting people on. Since this was the last year for the Blue Angels to be coming to Maine we were really hoping to take the kids. Brian had spent most of the day Saturday at the airshow but because of the weather they were unable to fly.

I had the small camera and took pictures of the kids. Brian had his nice camera and got some good shots of the planes and such. I will try to get some of those are here another time.

Alysa is almost 2 and a half. The last couple weeks she has turned into a mommy's girl like never before. She is in the "I don't like Daddy stage" and doesn't want him to help her do anything. Poor Dad. Though I can get this treatment during the day when he is not home. If I have to discipline Alysa she will cry and say, "I want Katie."

Tyler and Alysa are in the midst of potty training. I don't think that it is going very well. My floor has been christened multiple times.....a day. Tyler will be 4 in December and I kept waiting for him to kind of initiate wanting to potty train himself. It didn't seem like that was going to happen so I just said one day, "ok. no more diapers. It's big girl and boy undies for you. We will see what happens." (They still wear diapers when sleeping) Well, it's an experience....that is for sure. I am certain it is much easier when you are only try to work with one child at a time but I know that parents withs twins or more go through this. (And, I would be if Olivia was here)

On that note.. I had a very strange experience a few nights ago. Alysa was having a bad night and was up multiple times. One of the times she had come out of her room and was lying on the couch. She was just so tired that she wasn't really responding to me. Her eyes were half open but kinda rolling around. I can't really explain it but for a moment I did not see Alysa at all. I saw Olivia. The girls, even though identical twins never really looked the same because of weight differences and Olivia's condition. Had all gone well, they would have looked identical. It's strange to think about two girls running around here looking like Alysa does now. It's not often but there are those moments that I see Olivia in Alysa's face. It's a very strange feeling and very sad.

I am still missing mom more that I can express. I am so overwhelmed as to what to do about her house. Though I had dropped the price $100,000! there is still no interest. The estate money is gone and I just don't don't know what to do.......more to come.....Katelyn needs to go to bed......
Posted by Amy Ritchie at 9:07 PM 3 comments: Links to this post

not what was promised

Ok. Things are not going as planned tonight. I promised you all that I would write something. Well, I’ve written something ha ha I wanted to talk about a group that I have started going to called MOPS. I can’t find the paper about it that I am looking for so I am going to wait until I find it.

Out internet connection is slow tonight so pictures will also have to wait.

I had planned on writing tonight but I am going to be finishing up some house work instead. My dad called this afternoon and he will be stopping in tomorrow for a visit. I believe this will be the fist time he has seen Katelyn. So, as you can see we don’t see each other that often. As I stated, I’ve been doing well with the house the last few weeks but we had a busy couple days and things are starting to get a little crazy. I’d like to get it back under control and make a good impression.

So, I now will probably post sometime on Saturday. Tomorrow evening I will be at a Creative Memories Scrapbooking get together……
Posted by Amy Ritchie at 10:53 PM No comments: Links to this post

You guys checked this blog 37 times on Monday. I guess that is sign you all are waiting for me to write something. I don't know why I haven't written. Things are going pretty well here. Emotionally I am in a good place and physically I am doing well at keeping up with the housework. Brian and I are very tired as I could not tell you the last night we got a full nights sleep. At this point all three kids are waking up multiple times in the night. Tyler is scared of shadows and monsters. Also, he will get out of bed every time the furnace comes on in the night and go sit on the hot air vent. I don't know why but he likes to do that. Alysa insists on having her light on all night and wakes up screaming if she wakes up in a dark room. Katelyn just wants to sleep in our warm bed and has been teething.

I've had many things that I have wanted to write about and then I get busy or put it off and the next day it doesn't seem as important.

Tonight is a busy night for us with Detour and Tyler is in Cubbies now. But, I am will make a promise to you all that I will write at some point tomorrow. I will make it nice and long with lots of pictures.
Posted by Amy Ritchie at 11:08 AM 2 comments: Links to this post